Please review our knowledgebase below for solutions articles before scheduling an appointment.
We have a variety of common troubleshooting topics already covered for you to browse

You can schedule an appointment for installation, training, or troubleshooting assistance here

The signage, awards and personalization industries have seen many new marking technologies

emerge in recent years. One could argue that the kingpin of these marking technologies is laser

engraving. True enough, laser technology is widely popular and rightfully so, considering all of

its many features and benefits it brings to the table. However, mechanical/rotary engraving is

one of the foundational technologies that revolutionized the industry. Though it may not be

monopolizing the spotlight these days, rotary/mechanical engraving remains one of the most

industries. Markets ranging from the weekend DIY hobbyist to the most advanced sign shops

all can benefit and profit from mechanical/rotary engraving technology.

rotating bit or tool to carve away material. A similar engraving method commonly known as

material, scribing lines and shapes into the surface to create the design. For the scope of this

article, we will focus primarily on rotary engraving.

Simply put, rotary engraving is the removal of a substrate’s surface using a rotating carving bit,

typically referred to as a “tool”. The tool is installed into the spindle of a computer-controlled

router. A nose cone is attached to the bottom of the router’s spindle, which normally pushes

against the material’s surface during engraving. Engraving depth is controlled using an

adjustable dial known as a “micrometer” on the spindle. Most micrometers adjust in very small

surface is the depth the engraving will be.

Many substrates that are designed for rotary engraving do not require deep engraving. Most

engravable sheet products are designed to be engraved at depths ranging from .001” to .015”.

effects or bevels are desired. More on this later.

There are a number of engraving tool styles available for rotary engraving. Some are meant for

hard substrates such as brass, aluminum and stainless steel while others are meant for softer

substrates like plastics, acrylics, phenolics and more. We will look at tools for softer materials

in this article. When choosing a tool to use for an engraving substrate, it is important to use the

correct bit for the type of engraving intended.

It is common to see terms such as “flute” and “spiral” when selecting a tool. A flute is a groove

tool tip during engraving. Single fluted bits have one opening for chip removal and also only

have one cutting edge. Most often single fluted tools are also “straight fluted” in that the

groove or opening does not spiral up the tool. It is simply an opening on the side of the tool tip

that allows chips to escape while the tool rotates. There are some variations, but generally

single fluted tool tips appear like the tip has been cut in half. The missing “half” is the flute.

Single fluted straight tools are great choices for plastics, woods and generally all types of

materials because they produce a smooth finish in the engraved areas. They are designed for

geometry does not lift away chips, therefore a vacuum system attached to the nose cone is

highly recommended. If in doubt on which tool to choose or if all others have failed, a single-fluted

straight tool is a great one to try.

tend to have a longer lifespan and are better balanced due to the double cutting edges. The

substrates including plastics, wood and aluminum. There are three and even four fluted tools

as well. These types of multi-fluted tools can achieve extremely smooth edges and can be a

good solution to very abrasive materials. The drawback to these tools is the feed rate must be

greatly reduced due to the multiple cutting edges.

may also be referred to as FLX bits, meaning they are meant to be used on soft, flexible

materials. FLX bits are among the most common types of bits used on plastics. The width of

the tool tip determines how wide a line or path the tool will engrave. Common tip sizes range

Choosing the best tip width to use for the engraving job depends on the artwork design. Wider

tip widths will cut wider paths which is useful for large, bold lettering where precise corners on

seriffed fonts may not be required. The larger cut paths also help to reduce production time by

There are two components that are extremely important to rotary engraving success. The ﬁrst component is a vacuum system. The vacuum system is imperative for high quality engraving and must adequately remove all of the chips produced during engraving. The system must be purpose-built for rotary engraving or CNC routers and must be properly attached to the nose cone of the engraver. The vacuum system should be cleaned, emptied and checked regularly to ensure optimum performance. General purpose vacuums or shop-vacs are not recommended. The second important component is a solid holding system for the engraving substrate. High quality engraving results are impossible to achieve if the substrate is not held down straight, level and strong to the engraver bed. There are numerous options for this task, including purpose-built jigs, double-sided tapes, and tacky mats. Tacky mats are one of the most popular methods for securing engraving substrates because they hold a strong grip on the substrate, they last a very long time if taken care of, and can easily be cleaned and reused over and over again. Some mats are double-sided, so they can adhere straight onto the engraving bed, and the substrate then adheres directly to the top surface of the mat.

To round out our introductory journey into rotary engraving, we will walk through a basic engraving job. The ﬁrst step requires setting up the engraver for the engraving job. Select the proper tool and install it into the spindle. Once the tool is installed, a process known as “zeroing” the tool must be done. Zeroing is matching the depth of the engraving tool to the surface of the nose cone. Before zeroing the tool, make sure the micrometer is set to “0” to ensure the depth settings will read accurately when adjusted. 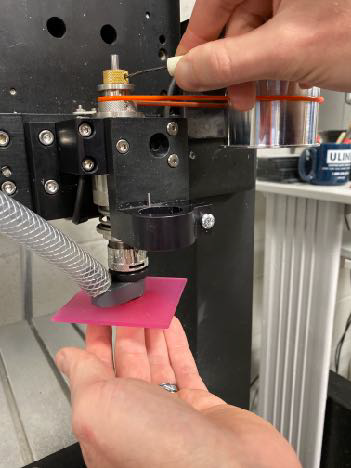 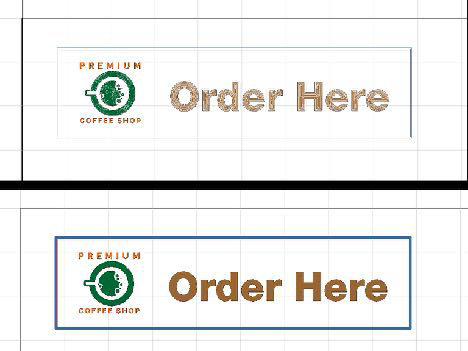 Once the artwork is ready and all other settings are in place, it is time to send the job to the engraver. When engraving plastic, the protective masking can be left on the surface to help prevent ghosting and minor surface scratching. 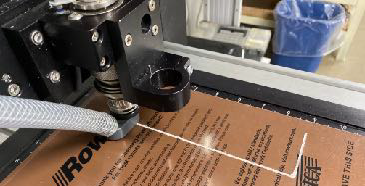 After cutting out the blank from the substrate, the masking can be removed from the blank and the process of engraving the graphics can begin. Depending on the complexity of the shapes, diﬀerent sized bits may be needed, requiring tool changes throughout the job. 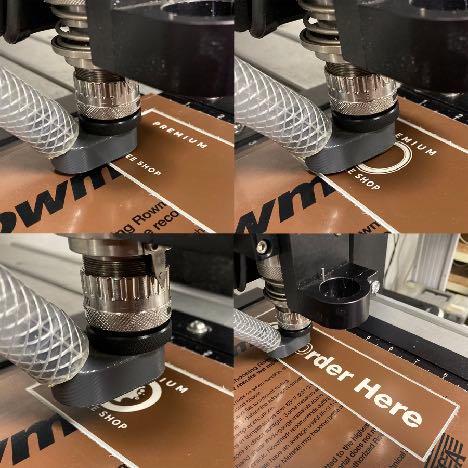 Once the engraving is complete, the new sign is ready to be removed from engraver. 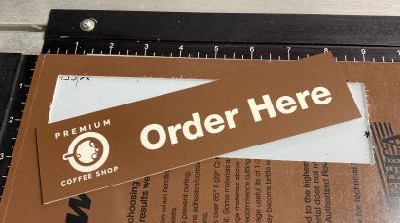 The new sign can now have any ﬁnishing touches added, such as ﬁxtures or frame options. 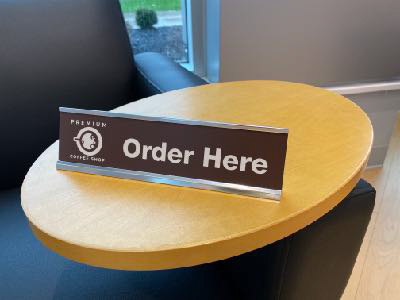 In conclusion, rotary engraving is the “tried and true” seasoned veteran of professional marking. In today’s high-tech world, rotary engraving continues to oﬀer great value to clients, customers and hobbyists alike. The technology adds great ﬂexibility, versatility and proﬁt to those who have already discovered the “latest and greatest” but still seek that one last tool to complete their arsenal of fabrication potential.

Did you find it helpful? Yes No

Send feedback
Sorry we couldn't be helpful. Help us improve this article with your feedback.